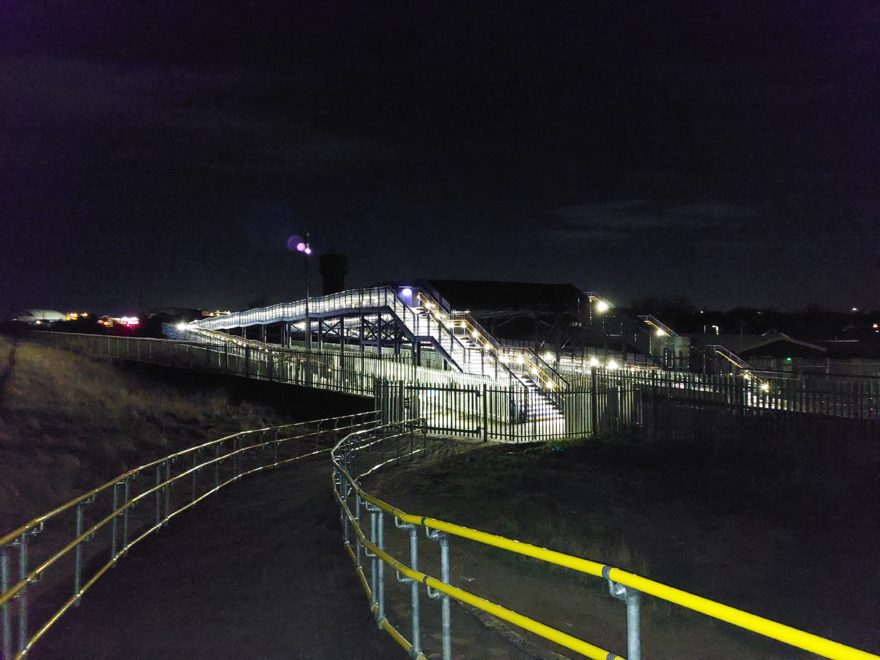 Story Contracting joined celebrations to mark the opening of the new fully accessible footbridge at Suggitt’s Lane in Cleethorpes.

The Story team completed over 20,200 working hours to build the new bridge, on behalf of Network Rail, which will provide an accessible and safe route over the railway from Suggitt’s Lane to the promenade.

The bridge, which has stepped and ramped access, was officially opened on Friday (March 18) by Mayor of North East Lincolnshire, Councillor David Hasthorpe, alongside Martin Vickers, MP for Cleethorpes, and Lynn Sayles from the Suggitt’s Lane Campaign Group.

Kimberley Middleton, Scheme Project Manager, said: “I’d like to thank local residents for their patience while we carried out this essential work.

“We always aim to be considerate of our neighbours and to ‘Do it Right’ by the local community. Throughout the project we’ve worked with Network Rail and North East Lincolnshire Council to actively communicate with the residents to help minimise the impact of the project; and we’ve taken steps to improve the local environment, from taking part in litter picks to planting 20 new trees in local parks.

“I am delighted that the work is now complete, and residents can use this new bridge to cross the railway safely.”

Work began in June 2021, with much of the structure being built off-site to minimise the impact on people living nearby.

Despite setbacks due to Storm Dudley and Eunice, the Story team successfully and safely installed the 11-metre-long main bridge deck weighing around 10 tonnes. The bridge has lighting, 300 metres of accessible ramps, and four CCTV cameras to improve safety in the area.

Andrew Murray, Director of Engineering and Asset Management for Network Rail, said: “I’m thrilled to see the footbridge now open for people in Cleethorpes. We’ve worked closely with North East Lincolnshire Council to build a safe and accessible route over the railway, which will restore a much-used link to the beachfront. I’d like to thank the community for their support whilst we built the bridge and I hope that its opening comes as welcome news.”

North East Lincolnshire Council’s Portfolio Holder for Environment and Transport, Cllr Stewart Swinburn, said: “There is no doubt just looking at the new structure what a difference this will make especially to local people, who will now be able to enjoy safe and easy passage from their homes to the beach. This is a perfect example of partnership working at its best, which has delivered a great result and we want to thank everyone who has been involved.”

As part of Story Contracting’s commitment to making carbon reductions and improving biodiversity, the team joined forces with Metcalfe Fencing & Land Services, to plant 20 trees and clear up rubbish from green spaces around the new footbridge.

James Metcalfe, Managing Director of Metcalfe Fencing & Land Services said: “It’s been a privilege to be included in this project with Story Contracting and the council helping to improve the environment for the local community and generations to come.

Suggitt’s Lane footbridge was jointly funded with £2m from Network Rail and £1.6m from the DfT, and will now be owned and maintained by North East Lincolnshire Council. It was built to replace a level crossing which was closed for safety reasons in April 2019.