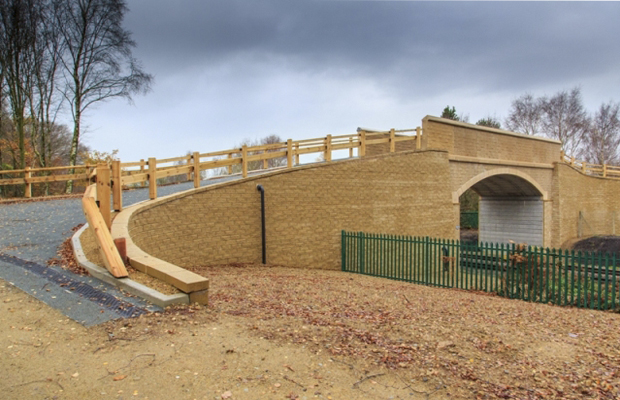 Story Contracting is being considered for a prestigious UK Rail Industry Award along with some of the biggest names in the country. The shortlist was announced this week with Story Contracting up against Network Rail, Tata Steel, Mersey Rail Electrics and Twinfix in the ‘Outstanding Project’ category.

Working together with Network Rail, Story Contracting developed an innovative solution to close the existing high-risk level crossing at Pleasington Golf course in Lancashire and provide an alternative method of crossing the railway.

Although level crossings in the UK are among the safest in Europe, they still pose a significant safety risk to the public. Story Contracting developed an Overbridge solution which was a first for the railway in the UK. It was this exceptional show of capability by Story that now sees them in the running for recognition at the national awards in Battersea, London next year.

The project used special construction methodology, which meant that the bridge installation was able to be completed by Story Contracting in a single seven hour window. Story’s safety and design principles enhanced the delivery of the Overbridge, whilst causing minimal disruption to the rail timetable with no train delays experienced through the period of works. The bridge now cuts out the potential risk to pedestrians using the Golf Course.

The success of this innovative project now offers Network Rail the opportunity to save millions of pounds in replicating the design solution in other areas. The method is already being considered for other regions.

“It has been a phenomenal year for Story Contracting after being named as Network Rail’s Supplier of the year and to go into the New Year in the running for a UK Rail Industry Award just shows how hard our team works to consistently remain amongst the top suppliers to the industry. Our projects are continually breaking new ground and providing innovative solutions for our clients but this can only happen because of the talented team we have developed at Story Contracting.

The project at Pleasington wasn’t without its challenges but as a team we were able to overcome these to exceed our Stakeholders expectations and turn this work into an excellent project.”