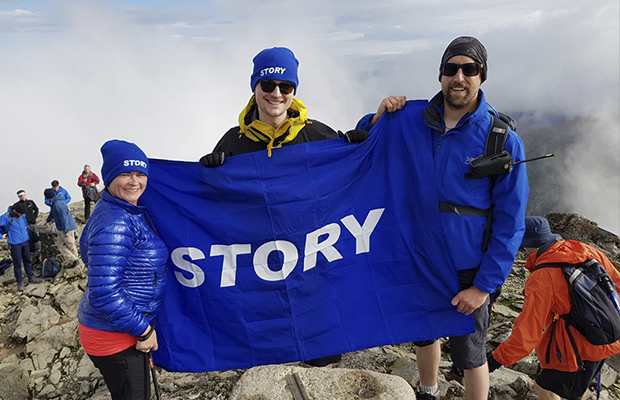 Anouska Chisholm, Marc Armstrong, Neil Eatock and Hilary Alcock set themselves the challenge to conquer the three highest mountains in England, Wales and Scotland in just over 36 hours. The Story team joined a fearless group of nearly 200 participants in order to raise money for the charity Railway Children, which helps children at risk on the streets.

The famous endurance challenge took place on Thursday 23 June and involved the group scaling Ben Nevis, Snowdon and Scafell Pike – estimated to be the equivalent of walking one third of the way up Mount Everest.

Marc Armstrong, Rail Agent at Story Contracting said: “The 3 Peaks Challenge was exactly that – challenging! 30 miles and 9,800m of ascent in 36 hours took its toll on us, but despite the lack of sleep and very tired legs our team managed to get through it. It was a great achievement, one we are very proud of and for a very worthwhile cause.”

The aim for each four-man team taking part in the Three Peaks Challenge by rail is to raise a total of £3,500 to help fund outreach projects with street children in India, Africa and the UK. Now in its twelfth year, the challenge has raised over £2 million and each year has helped Railway Children reach 5,000 new children who are at risk, needing shelter, food, clothing, medical supplies, education and counselling.

Katie Mason, Events Manager at Railway Children said she was delighted Story was taking on the challenge for the charity.

“The spirit and atmosphere you get with so many fundraising adventurers all travelling together with the same goal on the train is incredible”, she said. “All the money raised from the Three Peaks by Rail challenge will help to ensure we can continue our work supporting some of the most vulnerable children in society.”