Auch Viaduct was awarded a plaque to honour the refurbishment work delivered to the 9-span structure near Tyndrum, to secure the much-loved West Highland Line for years to come. The team battled extreme weather conditions, working day and night during a 9-day line blockade to lift the track to replace and waterproof the timber deck underneath. 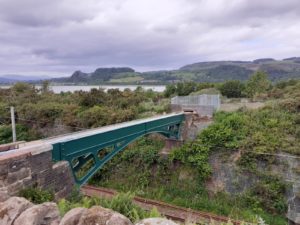 Works on a 180-year old cast iron aqueduct structure outside the village of Bishopton were also recognised and received a Highly Commended certification during the awards.

John MacArthur, Story Scotland Managing Director, said: “It has been a challenging year for all of us, so to be rewarded for our hard work and dedication to deliver these important schemes for Scotland’s Railway and the communities in which we are integrated, is fantastic and reminds us all of the vital contribution civil engineers make in the region.

“These awards are testament to everyone involved throughout the projects, from our clients and designers to our delivery team and subcontractors. Well done team.”

This win marks the second year in a row of success for Story Scotland, with the restoration works to Stirling Station recognised in last year’s virtual ceremony. All projects were delivered on Scotland’s Railway, in partnership with Network Rail.